It looked so easy when Amy did it on the video! Who would have thought it would take me five attempts this month to get three soaps I felt good about entering?  Well, the first two tries I did a 33% water discount instead of a 33% lye solution. That was on me. The third time I did the 33% lye solution but my piping soap was still too thick. The fourth time I left the wax out of the recipe. Each time I made the recipe I only stick blended maybe 10 seconds and it was at thin trace.  I would pour the batter into cups with colorants. I would stir the colors into the cups and within just a few minutes the soap would be ready to transfer into piping bags.  I would start on my design and SHAZAM! The soap would suddenly be too thick to work with.  So frustrating!  I didn't know what I was doing wrong, but after the fourth try I was tired of it so I was ready to go with what I had.  A couple of days went by and I thought about what it said in the recipe instructions about the lye solution,,,,,"30% lye solution--I would decrease the water to make a 33% lye solution if you're doing colors to help reduce ash"  SHAZAM!! That's it!  I needed to increase the water!  I had one more try in me and here I am again - down to the wire.  Yes, it's Saturday, August 24 and I'm on attempt Number 5.  And here they are: 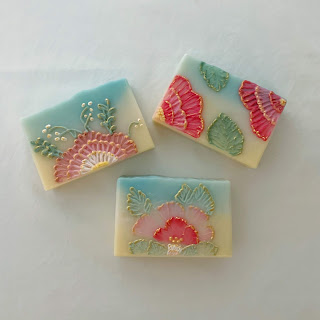 This is what inspired me: 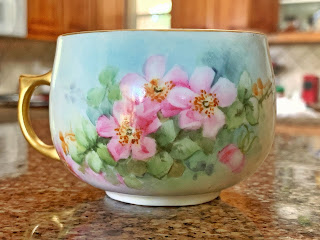 I actually wanted to paint a soap to look just like this teacup, but the design is too small and inticate.  Not that I didn't try.  Here are all my attempts: 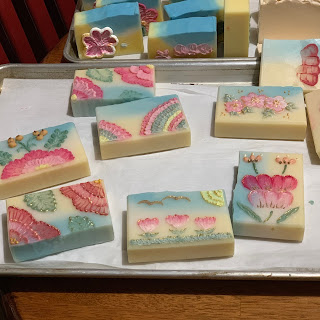 You can see the one that sort of looks like the teacup in the upper right corner.  The second one was the one in the foreground and then the third was the one that looks like rainbows.  Then I thought, "What am I? A third grader?" Not to insult any third graders that might be reading this but I am waaaaaaay past 8 years old.  The soaps in the background are my first attempt at ombre.  I won't even go into that....

And I do have to mention that with all these attempts my soap was aging by the day making it more difficult to get the piping soap to stick.  The last two attempts I was planing each bar before I would pipe the soap and wiping them with rubbing alcohol.  Here are the close ups: 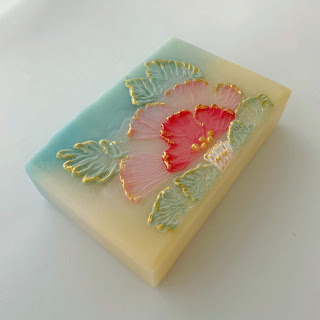 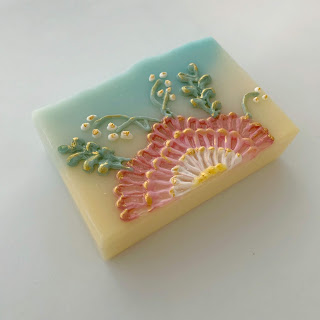 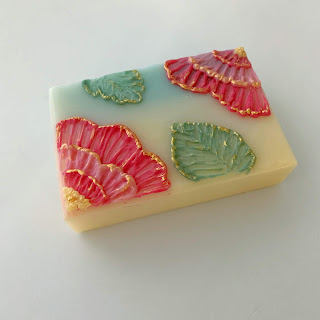 I'm happy with these.

I have less than 3 hours to submit my entry....

Posted by Lynette Olsen at 9:30 AM

Ahhh, so frustrating when your soap sets up and it doesn't make sense why! I'm so glad you figured out the issue and made some gorgeous brush embroidery soaps! The teacup is a beautiful inspiration piece. Well done!!

Beautiful designs and i love the colors you were using ❤️❤️ you did a great job!!

This soap is so gorgeous! The colors and the design are wonderful.

These are absolutely gorgeous!! From the background soap to the detailed design and colors, they're just amazing!! 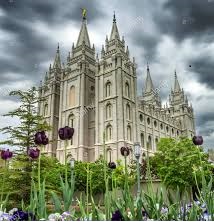 Families Can Be Together Forever

Me and My Man